The Northwest Territories is a federal territory of Canada. At a land area of approximately 1,144,000 square kilometers and a 2016 census population of 41,786, it is the second-largest and the most populous of the three territories in Northern Canada. Its estimated population as of 2018 is 44,445. Yellowknife became the territorial capital in 1967, following recommendations by the Carrothers Commission.

The Northwest Territories, a portion of the old North-Western Territory, entered the Canadian Confederation on July 15, 1870, but the territory was subdivided several times to create new provinces or territories or enlarge existing ones. Its current borders date from April 1, 1999, when the territory was subdivided to create Nunavut to the east, via the Nunavut Act and the Nunavut Land Claims Agreement. While Nunavut is mostly Arctic tundra, the Northwest Territories has a slightly warmer climate and is both boreal forest (taiga), and tundra, and its most northern regions form part of the Canadian Arctic Archipelago.

The Northwest Territories is bordered by Canada’s two other territories, Nunavut to the east and Yukon to the west, and by the provinces of British Columbia, Alberta, and Saskatchewan to the south, and may touch Manitoba at a quadripoint to the southeast.

The name is descriptive, adopted by the British government during the colonial era to indicate where it lay in relation to Rupert’s Land. It is shortened from North-Western Territory. In Inuktitut, the Northwest Territories are referred to as Nunatsiaq, “beautiful land.” The northernmost region of the territory is home to Inuvialuit, part of Inuit Nunangat called Nunangit, while the southern portion is called Denendeh (an Athabaskan language word meaning “our land”). Denendeh is the vast Dene country, stretching from central Alaska to Hudson Bay, within which lay the homelands of the numerous Dene nations. 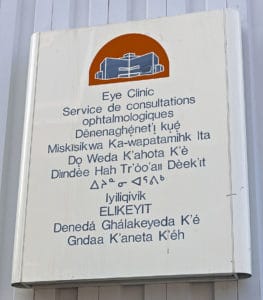 All Eleven Official Languages of NWT

There was some discussion of changing the name of the Northwest Territories after the splitting off of Nunavut, possibly to a term from an Indigenous language. One proposal was “Denendeh,” as advocated by the former premier Stephen Kakfwi, among others. One of the most popular proposals for a new name – one to name the territory “Bob” – began as a prank, but for a while it was at or near the top in the public-opinion polls.

In the end, a poll conducted prior to division showed that strong support remained to keep the name “Northwest Territories”. This name arguably became more appropriate following division than it had been when the territories extended far into Canada’s north-central and northeastern areas.

Geographical features include Great Bear Lake, the largest lake entirely within Canada, and Great Slave Lake, the deepest body of water in North America at 614 m, as well as the Mackenzie River and the canyons of the Nahanni National Park Reserve, a national park and UNESCO World Heritage Site. 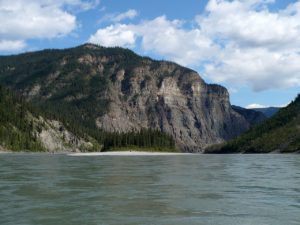 Territorial islands in the Canadian Arctic Archipelago include Banks Island, Borden Island, Prince Patrick Island, and parts of Victoria Island and Melville Island. Its highest point is Mount Nirvana near the border with Yukon at an elevation of 2,773 meters.

In 1670, the Hudson’s Bay Company (HBC) was formed from a royal charter, and was granted a commercial monopoly over Rupert’s Land. Present day Northwest Territories laid northwest of Rupert’s Land, known as the North-Western Territory. Although not formally part of Rupert’s Land, the HBC made regular use of the region as a part of its trading area. The Treaty of Utrecht saw the British became the only European power with practical access to the North-Western Territory, with the French surrendering its claim to the Hudson Bay coast.

Europeans have visited the region for the purposes of fur trading, and exploration for new trade routes, including the Northwest Passage. Arctic expeditions launched in the 19th century include the Coppermine expedition. 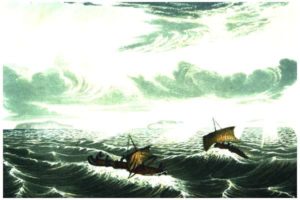 In 1867, first Canadian residential school opened in the region in Fort Resolution. The opening of the school was followed by several others in regions across the territory, thus contributing to the it reaching the highest percentage of students in residential schools compared to other area in Canada.

The present-day territory came under the authority of the Government of Canada in July 1870, after the Hudson’s Bay Company transferred Rupert’s Land and the North-Western Territory to the British Crown, which subsequently transferred them to Canada, giving it the name the North-west Territories. 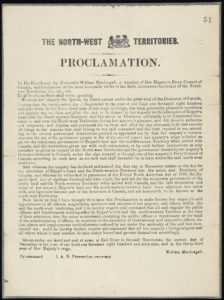 This immense region comprised all of today’s Canada except that which was encompassed within the early signers of Canadian Confederation, that is, British Columbia, early forms of present-day Ontario and Quebec (which encompassed the coast of the Great Lakes, the Saint Lawrence River valley and the southern third of Quebec), the Maritimes (NS, PEI and NB), Newfoundland, the Labrador coast, and the Arctic Islands, except the southern half of Baffin Island (the Arctic Islands remained under direct British claim until 1880).

After the 1870 transfer, some of the North-West Territories was whittled away. The province of Manitoba was created on July 15, 1870, at first a small square area around Winnipeg, and then enlarged in 1881 to a rectangular region composing the modern province’s south. By the time British Columbia joined Confederation on July 20, 1871, it had already (1866) been granted the portion of North-Western Territory south of 60 degrees north and west of 120 degrees west, an area that comprised most of the Stickeen Territories. 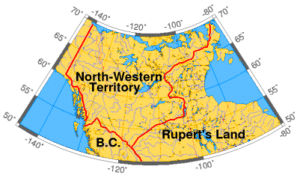 In the meantime, the Province of Ontario was enlarged northwestward in 1882. Quebec was also extended northwards in 1898. Yukon was made a separate territory that year, due to the Klondike Gold Rush, to free the North-west Territories government in Regina from the burden of addressing the problems caused by the sudden boom of population and economic activity, and the influx of non-Canadians. The provinces of Alberta and Saskatchewan were created in 1905. In 1906, the Parliament of Canada renamed the “North-West Territories” as the Northwest Territories, dropping all hyphenated forms of it.

On April 1, 1999, the existing Northwest Territories was split into two parts, with a separate Nunavut territory being formed to represent the Inuit people.

The Northwest Territories has the highest per capita GDP of all provinces or territories in Canada, C$76,000 in 2009. However, as production at the current mines started to wind down, no new mines opened and the public service shrank, the territory lost 1,200 jobs between November 2013 and November 2014.

The NWT’s geological resources include gold, diamonds, natural gas and petroleum. BP is the only oil company currently producing oil in the Territory. NWT diamonds are promoted as an alternative to purchasing blood diamonds. Two of the biggest mineral resource companies in the world, BHP Billiton and Rio Tinto mine many of their diamonds from the NWT. In 2010, NWT accounted for 28.5% of Rio Tinto’s total diamond production (3.9 million carats, 17% more than in 2009, from the Diavik Diamond Mine) and 100% of BHP’s (3.05 million carats from the EKATI mine). 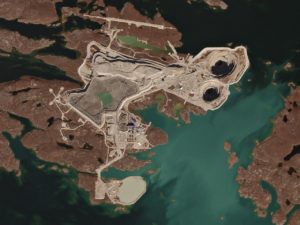 Major mines in the Northwest Territories include, or have included:

Northwest Territories has eight numbered highways. The longest is the Mackenzie Highway which stretches from the Alberta Highway 35’s northern terminus in the south at the Alberta – Northwest Territories border at the 60th parallel to Wrigley, Northwest Territories in the north. Ice roads and winter roads are also prominent and provide road access in winter to towns and mines which would otherwise be fly-in locations. Yellowknife Highway branches out from Mackenzie Highway and connects it to Yellowknife. Dempster Highway is the continuation of Klondike Highway. It starts just west of Dawson City, Yukon, and continues east for over 700 km to Inuvik. 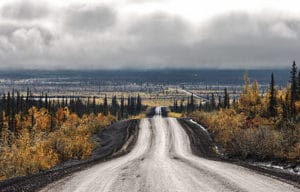 Yellowknife did not have an all-season road access to the rest of Canada’s highway network until the completion of Deh Cho Bridge in 2012. Prior to that, traffic relied on ferry service in summer and ice road in winter to cross the Mackenzie River. This became a problem during spring and fall time when the ice was not thick enough to handle vehicle load but the ferry could not pass through the ice, which would require all goods from fuel to groceries to be airlifted during the transition period.

Yellowknife Transit is the public transportation agency in the city, and is the only transit system within the Northwest Territories.

Yellowknife Airport is the largest airport in the territory in terms of aircraft movements and passengers. It is the gateway airport to other destinations within the Northwest Territories. As the airport of the territory capital, it is part of the National Airports System. It is the hub of multiple regional airlines. Major airlines serving destinations within Northwest Territories include Buffalo Airways, Canadian North, First Air, North-Wright Airways.

Flag of the Northwest Territories:

The original flag of the Hudson’s Bay Company served as the territorial flag from the moment Rupert’s Land and the North-Western Territory was purchased by Canada in 1869. After Saskatchewan and Alberta were created out of the Northwest Territories’ most populous areas in 1905, the flag was discontinued. The Legislative Assembly of the Northwest Territories was created in 1951. 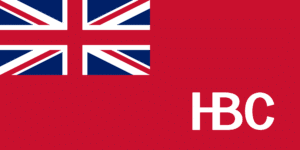 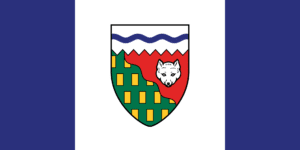 Flag of the Northwest Territories

Two blue panels represent the Northwest Territories’ many rivers and lakes. The white section, representing ice and snow, is equal in area to the 2 blue panels combined. The territorial Shield is centred in the white section. The white section of the Shield, with a wavy blue line dividing it, represents the Arctic Ocean and the Northwest Passage. A diagonal line, representing the tree line, divides the lower portion into a green and red section with green symbolizing the trees and red symbolizing the tundra. The gold bars in the green section and the white fox in the red section represent the abundant minerals and furs upon which the history and prosperity of the Northwest Territories has been based.

Brought to you by: MoldSTAT Mold Cleaner