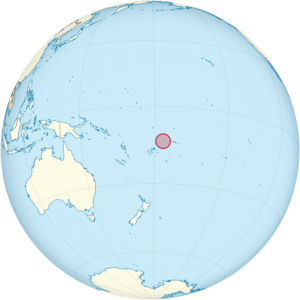 Its land area is 142.42 km2 (54.99 sq mi) with a population of 11,558 at the 2018 census (down from 14,944 at the 2003 census). Matā’Utu is the capital and biggest city. The territory is made up of three main volcanic tropical islands along with a number of tiny islets, and is split into two island groups that lie about 260 km (160 mi) apart, namely the Wallis Islands (‘Uvea) in the northeast, and the Hoorn Islands (also known as the Futuna Islands) in the southwest, including Futuna Island proper and the mostly uninhabited Alofi Island.

The earliest signs of human habitation in these islands are from the Lapita culture, dating to around 850 to 800 BCE.

The islands served as natural stopover points for boat traffic going between Fiji and Samoa. During the Tongan invasions of the 15th and 16th centuries, the islands showed varying levels of resistance and assimilation, with Futuna retaining more of their pre-Tongan cultural features while Wallis underwent more fundamental changes in society, language and culture. The original inhabitants built forts and other identifiable ruins on the islands, some of which are still partially intact.

Ruins of the Talietumu Fort

Oral history and archaeological evidence suggest that the Tongan invaders reoccupied and modified some of these structures. Oral history also preserves a cultural memory of long-standing relationships between Samoa and Futuna going back to the islanders’ origin stories.

Futuna was first put on the European maps by Willem Schouten and Jacob Le Maire during their circumnavigation of the globe in 1616. They named the islands “Hoornse Eylanden” after the Dutch town of Hoorn where they hailed from. This was later translated into French as “Isles de Horne.” The Wallis Islands are named after the British explorer Samuel Wallis, who sailed past them in 1767 after discovering Tahiti. The French were the first Europeans to settle in the territory, with the arrival of French missionaries in 1837, who converted the population to Roman Catholicism. Pierre Chanel, canonized as a saint in 1954, is a major patron of the island of Futuna and the region. 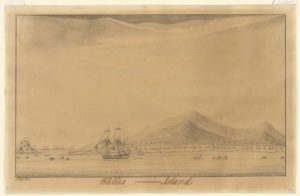 Drawing of Wallis Island by Captain Samuel Wallis in 1767

On 5 April 1842, the missionaries asked for the protection of France after the rebellion of a part of the local population. On 5 April 1887, the Queen of Uvea (on the island of Wallis) signed a treaty officially establishing a French protectorate. The kings of Sigave and Alo on the islands of Futuna and Alofi also signed a treaty establishing a French protectorate on 16 February 1888. The islands were at that time put under the authority of the French colony of New Caledonia.

In 1917, the three traditional kingdoms were annexed to France and turned into the Colony of Wallis and Futuna, which was still under the authority of the Colony of New Caledonia.

During World War II, the islands’ administration was pro-Vichy until a Free French corvette from New Caledonia deposed the regime on 26 May 1942. Units of the US Marine Corps landed on Wallis on 29 May 1942.

In 1959, the inhabitants of the islands voted to become a French overseas territory, effective in 1961, thus ending their subordination to New Caledonia.

In 2005, the 50th King of Uvea, Tomasi Kulimoetoke II, faced being deposed after giving sanctuary to his grandson who was convicted of manslaughter. 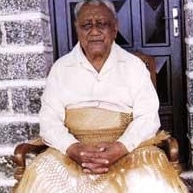 The King claimed his grandson should be judged by tribal law rather than by the French penal system. There were riots in the streets involving the King’s supporters, who were victorious over attempts to replace the King. Two years later, Tomasi Kulimoetoke died on 7 May 2007. The state was in a six-month period of mourning. During this period, mentioning a successor was forbidden. On 25 July 2008, Kapiliele Faupala was installed as King despite protests from some of the royal clans. He was deposed in 2014. There were no kings installed for two years. Finally, a new king, Patalione Kanimoa, was installed on Wallis in 2016; Filipo Katoa in Alo on Futuna succeeded after Petelo Sea had abdicated, and Eufenio Takala succeeded Polikalepo Kolivai in Sigave. The French president, François Hollande, was present.

Wallis and Futuna is located about two-thirds of the way from Hawaii to New Zealand (225 miles west of Samoa and 300 miles north-east of Fiji). 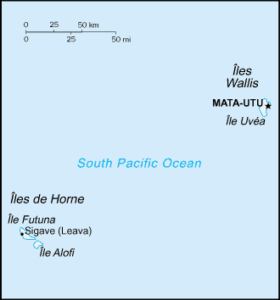 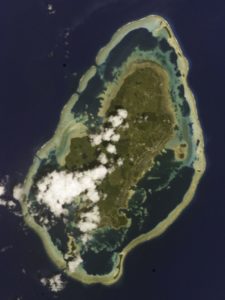 Only five percent of the islands’ land area is arable land; permanent crops cover another 20%. Deforestation (only small portions of the original forests remain), largely as a result of the continued use of wood as the main fuel source, is a serious problem; as a consequence of cutting down the forests, the mountainous terrain of Futuna is particularly prone to erosion. There are no permanent settlements on Alofi because of the lack of natural freshwater resources.

The territory’s economy is limited to traditional subsistence agriculture, with about 80% of the labor force earning its livelihood from agriculture (coconuts and vegetables), livestock (mostly pigs), and fishing. About 4% of the population is employed in government. Revenues come from French government subsidies, licensing of fishing rights to Japan and South Korea, import taxes, and remittances from expatriate workers in New Caledonia, French Polynesia and France. Industries include copra, handicrafts, fishing, and lumber. Agricultural products include coconuts, bread fruit, yams, taro, bananas, pigs, and fish. 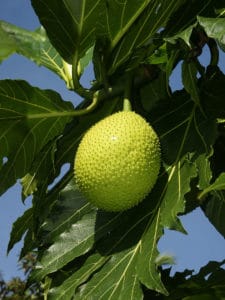 In 1991, BNP Nouvelle-Calédonie, a subsidiary of BNP Paribas, established a subsidiary, Banque de Wallis-et-Futuna, which currently is the only bank in the territory. Two years earlier Banque Indosuez had closed the branch at Mata-Utu that it had opened in 1977, leaving the territory without any bank. Exports include copra, chemicals, and fish. 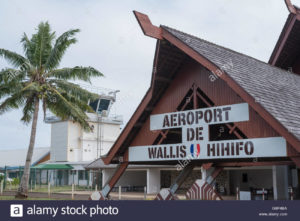 There are two airports, Hihifo Airport on Wallis with a paved runway of 2.1 kilometres (1.3 mi), and Pointe Vele Airport on Futuna with a 1 kilometre (0.62 mi) smaller runway. New Caledonia-based Aircalin operates the only commercial flights that go to Wallis, where it has an office in Mata-Utu. There are currently no commercial boat operators.

Flag of Wallis and Futuna:

The official flag of Wallis and Futuna is the French national flag, as it is a French territory. 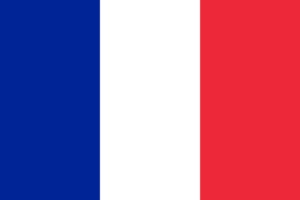 Wallis and Futuna has a locally used unofficial flag which bears the French flag in the canton.

Unofficial Flag of Wallis and Futuna

The unofficial flag of Wallis and Futuna features a red saltire on a white square, which in turn is placed on a red field (alternatively, a larger white cross pattée is used). The cross is shifted a little off centre toward the fly (the cross pattée is also shifted slightly downwards); the flag of France outlined in white on two sides is in the upper hoist quadrant.

Brought to you by: Cleaner Today Moth Traps