By 2012, there has been a “small contingent of U.S. special-operations troops” – in addition to CIA and “unofficially acknowledged” U.S. military presence – in response to increasing terror attacks by AQAP on Yemeni citizens. Many analysts have pointed out the former Yemeni government role in cultivating terrorist activity in the country. Following the election of the new president, Abdrabbuh Mansur Hadi, the Yemeni military was able to push Ansar al-Sharia back and recapture the Shabwah Governorate. 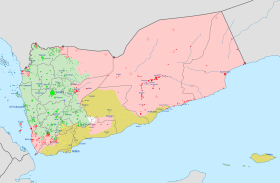 The central government in Sana’a remained weak, staving off challenges from southern separatists and Shia rebels as well as AQAP. The Shia insurgency intensified after Hadi took power, escalating in September 2014 as anti-government forces led by Abdul-Malik al-Houthi swept into the capital and forced Hadi to agree to a “unity” government. The Houthis then refused to participate in the government, although they continued to apply pressure on Hadi and his ministers, even shelling the president’s private residence and placing him under house arrest, until the government’s mass resignation in January 2015. The following month, the Houthis dissolved parliament and declared that a Revolutionary Committee under Mohammed Ali al-Houthi was the interim authority in Yemen. Abdul-Malik al-Houthi, a cousin of the new acting president, called the takeover a “glorious revolution.” However, the “constitutional declaration” of 6 February 2015 was widely rejected by opposition politicians and foreign governments, including the United Nations.

Hadi managed to flee from Sana’a to Aden, his hometown and stronghold in the south, on 21 February 2015. He promptly gave a televised speech rescinding his resignation, condemning the coup, and calling for recognition as the constitutional president of Yemen. The following month, Hadi declared Aden Yemen’s “temporary” capital. The Houthis, however, rebuffed an initiative by the Gulf Cooperation Council and continued to move south toward Aden. All U.S. personnel were evacuated and President Hadi was forced to flee the country to Saudi Arabia. On 26 March 2015, Saudi Arabia announced Operation Decisive Storm and began airstrikes and announced its intentions to lead a military coalition against the Houthis, whom they claimed were being aided by Iran, and began a force buildup along the Yemeni border. The coalition included the United Arab Emirates, Kuwait, Qatar, Bahrain, Jordan, Morocco, Sudan, Egypt, and Pakistan. The United States announced that it was assisting with intelligence, targeting, and logistics. Saudi Arabia and Egypt would not rule out ground operations. After Hadi troops took control of Aden from Houthis, jihadist groups became active in the city, and some terrorist incidents were linked to them such as Missionaries of Charity attack in Aden on 4 March 2016. Since February 2018, Aden has been seized by the UAE-backed separatist Southern Transitional Council.[274]

More than 50,000 children in Yemen died from starvation in 2017. The famine in Yemen is the direct result of the Saudi Arabian-led intervention in Yemen and blockade of Yemen. The famine is being compounded by an outbreak of cholera that has affected more than one million people.

A topographic map of Yemen

Yemen is in Western Asia, in the southern part of the Arabian Peninsula. It is bordered by Saudi Arabia to the north, the Red Sea to the west, the Gulf of Aden and Guardafui Channel to the south, and Oman to the east.

A number of Red Sea islands, including the Hanish Islands, Kamaran, and Perim, as well as Socotra in the Arabian Sea, belong to Yemen; the largest of these is Socotra. Many of the islands are volcanic; for example Jabal al-Tair had a volcanic eruption in 2007, and before that in 1883. Although mainland Yemen is in the southern Arabian Peninsula and thus part of Asia, and its Hanish Islands and Perim in the Red Sea are associated with Asia, the archipelago of Socotra, which lies east of the horn of Somalia and is much closer to Africa than to Asia, is geographically and biogeographically associated with Africa. Socotra faces the Guardafui Channel and the Somali Sea.

Brought to you by: roof cleaner today