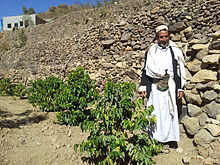 A coffee plantation in North Yemen

As a direct consequence of the country’s poverty, Yemen compares unfavorably with its Middle Eastern neighbors in terms of transportation infrastructure and communications network. The roads are generally poor, although several projects are planned to upgrade the system. There is no rail network, efforts to upgrade airport facilities have languished, and telephone and Internet usage and capabilities are limited. The Port of Aden has shown a promising recovery from a 2002 attack; container throughput increased significantly in 2004 and 2005. However, the expected imposition of higher insurance premiums for shippers in 2006 may result in reduced future throughput. The announcement in summer 2005 that the port’s main facility, Aden Container Terminal, would for the next 30 or more years be run by Dubai Ports International brings with it the prospect of future expansion.

Considering Yemen’s size, its road transportation system is extremely limited. Yemen has 71,300 kilometers of roads, only 6,200 kilometers of which are paved. In the north, roads connecting Sanaa, Taizz, and Al Hudaydah are in good condition, as is the intercity bus system. In the south, on the other hand, roads are in need of repair, except for the Aden–Taizz road.

Yemen has 57 airports, 17 of which have paved runways. Of the 57 airports, 5 are international: Aden International, Sanaa International, Taizz, Rayyan, and Al Hudaydah. A major reconstruction and expansion of Aden International was completed in 2001, including a new runway that can handle large, long-haul aircraft. Plans to make that airport a regional cargo hub, with an “air cargo village” by 2004 appear to have failed. Although construction began in January 2003, by the end of the year the managing company had dissolved.

Yemenia is the national airline; in 1996 it absorbed South Yemen, the former national carrier. It is expected that Yemenia, which is currently 49 percent owned by the Saudi Arabian government and 51 percent owned by the Yemen government, will eventually be privatized, but there has been resistance from the Saudis. In 2001 the airline carried 858,000 passengers. Because the airline’s existing fleet of 12 airplanes is rapidly becoming outdated, in 2002 three new aircraft were leased for eight years, and in early 2006 the airline announced plans to acquire six new aircraft, with options for an additional four, beginning in 2012.

The flag of Yemen was adopted on May 22, 1990, the day that North Yemen and South Yemen were unified. The flag is basically the Arab Liberation Flag of 1952, introduced after the Egyptian Revolution of 1952 in which Arab nationalism was a dominant theme. The Arab Liberation Flag of 1952 served as the inspiration for the flags of both North and South Yemen prior to unification, as well as for the current flags of Egypt, Iraq, Sudan and Syria.

Brought to you by: Cleaner Today Roof Cleaning