Known to botanists and other scientists as Psorothamnus spinosus, this California native plant is commonly known by several different, although similar, names including: smokethorn, smoketree, smoke tree, smokethorn dalea, and corona de Cristo. The most commonly used common name around Cathedral City, California is Smoke Tree, a name also used in the formal names of several area commercial and retail establishments.

The Smoke Tree is a member of the Legume, or pea, family of trees and shrubs. This is a very large family of plants with representative species on most every continent.

These relationships were not as well understood at the time the tree received its first botanical name of Dalea spinosa. Many years later following more detailed studies of the interrelationships of desert native plants, the Smoke Tree was reclassified into the Psorothamnus genus.

The Smoke Tree is a perennial tree, meaning that it blooms every year, producing seeds but remaining viable over multiple years, if not decades or more.   Most of the year Smoke Trees are just a mass of shimmering grey-green twigs which look like smoke in the distance. 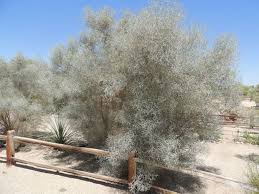 Smoke Tree Not In Bloom 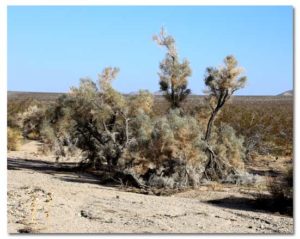 Smoke Tree Not in Bloom Located in Local Wash Area

However, in the early summer Smoke Trees break out in riotous bloom at which time they are covered with bright bluish – purple flowers which attract many native bee species.

Maintaining any Smoke Trees that exist on your land is therefore helpful in maintaining healthy native bee populations which help to ensure the continuation of many native plants as well as important food bearing crop plants.

The Smoke Tree is native to the dry desert washes of the Colorado Desert in Southern California, the Sonoran Desert in western Arizona, and most of eastern Baja California state including several northern Gulf of California, or Sea of Cortez, islands.

The tree is common in Joshua Tree National Park.

A more specific description of the range of the Smoke Tree follows:

To the west in Baja California it borders the western Gulf of California; it occurs on the islands there including Isla Ángel de la Guarda, but not Tiburon Island. To the east in Sonora, the species ranges into the northwest of the great Gran Desierto de Altar, on the northern shore of the Gulf of California.

In Arizona the ranges center on the river courses of southwest Arizona, specifically, the Bill Williams River in the north, then the Gila River in the south. The range also extends into extreme southern Nevada, mostly adjacent the Colorado River. 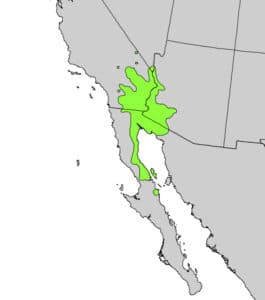 In the wild, Smoke Trees propagate themselves through seed dispersal following the massive bloom cycle in the late spring/early summer. The seeds tumble down washes with water flows and lodge under rocks at which point the seed will germinate and send down a tap root to seek out a regular water supply. At this time of the Smoke Tree growth cycle there is no visible external foliage, only the tap root. Once the tap root is established the Smoke Tree grows rapidly upward and outward. This reproduction strategy, dependent on water flows to disperse and initiate seed growth, limits the distribution of the Smoke Tree to areas in which water flows at least intermittently throughout the year. If you are fortunate enough to have a Smoke Tree on your property it is sign that, at some time, hopefully in the past, your land was in the path of water flows, including potential flash floods from water deposited higher up in the mountains, potentially well of out sight and sound of the eventual path the water will follow.

As a tree native to the desert region, the Smoke Tree is a valuable and no-fuss asset to any garden or landscape fortunate enough to feature one. You’d be hard pressed to find a more drought resistant and water-wise tree anywhere. If your land has a Smoke Tree, consider yourself lucky and do not disturb your Smoke Tree but rather let it enjoy its natural life cycle as a desert native.

Brought to you by: Soft Wash Roof Cleaner Reviews