During World War II, French Tunisia was ruled by the collaborationist Vichy government located in Metropolitan France. The antisemitic Statute on Jews enacted by the Vichy was also implemented in Vichy Northwest Africa and overseas French territories. Thus, the persecution, and murder of the Jews from 1940 to 1943 was part of the Shoah in France. 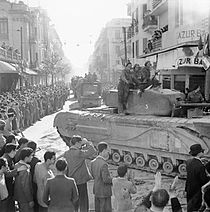 British tank moves through Tunis during the liberation, 8 May 1943

From November 1942 until May 1943, Vichy Tunisia was occupied by Nazi Germany. SS Commander Walter Rauff continued to implement the Final Solution there. From 1942 to 1943, Tunisia was the scene of the Tunisia Campaign, a series of battles between the Axis and Allied forces. The battle opened with initial success by the German and Italian forces, but the massive supply and numerical superiority of the Allies led to the Axis surrender on 13 May 1943.

Tunisia achieved independence from France on 20 March 1956 with Habib Bourguiba as Prime Minister. 20 March is celebrated annually as Tunisian Independence Day. A year later, Tunisia was declared a republic, with Bourguiba as the first President. From independence in 1956 until the 2011 revolution, the government and the Constitutional Democratic Rally (RCD), formerly Neo Destour and the Socialist Destourian Party, were effectively one. Following a report by Amnesty International, The Guardian called Tunisia “one of the most modern but repressive countries in the Arab world”.

In November 1987, doctors declared Bourguiba unfit to rule and, in a bloodless coup d’état, Prime Minister Zine El Abidine Ben Ali assumed the presidency in accordance with Article 57 of the Tunisian constitution. The anniversary of Ben Ali’s succession, 7 November, was celebrated as a national holiday. He was consistently re-elected with enormous majorities every five years (well over 80 percent of the vote), the last being 25 October 2009, until he fled the country amid popular unrest in January 2011.

Ben Ali and his family were accused of corruption and plundering the country’s money. Economic liberalization provided further opportunities for financial mismanagement, while corrupt members of the Trabelsi family, most notably in the cases of Imed Trabelsi and Belhassen Trabelsi, controlled much of the business sector in the country. The First Lady Leila Ben Ali was described as an “unabashed shopaholic” who used the state airplane to make frequent unofficial trips to Europe’s fashion capitals. Tunisia refused a French request for the extradition of two of the President’s nephews, from Leila’s side, who were accused by the French State prosecutor of having stolen two mega-yachts from a French marina. Ben Ali’s son-in-law Sakher El Materi was rumored as being primed to eventually take over the country.

Independent human rights groups, such as Amnesty International, Freedom House, and Protection International, documented that basic human and political rights were not respected. The regime obstructed in any way possible the work of local human rights organizations. In 2008, in terms of Press freedom, Tunisia was ranked 143rd out of 173.

The Tunisian Revolution was an intensive campaign of civil resistance that was precipitated by high unemployment, food inflation, corruption, a lack of freedom of speech and other political freedoms and poor living conditions. Labor unions were said to be an integral part of the protests. The protests inspired the Arab Spring, a wave of similar actions throughout the Arab world.

Brought to you by: Pantry Moth Trap