In 1798 the United Irishmen, led by Henry Joy McCracken, launched a rebellion in Ulster, mostly supported by Presbyterians. But the British authorities swiftly put down the rebellion and employed severe repression after the fighting had ended. In the wake of the failure of this rebellion, and following the gradual abolition of official religious discrimination after the Act of Union in 1800, Presbyterians came to identify more with the State and with their Anglican neighbors, due to their civil rights now being respected by both the state and their Anglican neighbors.

The 1859 Ulster Revival was a major Christian revival that spread throughout Ulster.

In the 19th century, Ulster had the only large-scale industrialization and became the most prosperous province on the island. In the latter part of the century, Belfast briefly overtook Dublin as the island’s largest city. Belfast became famous in this period for its huge dockyards and shipbuilding – and notably for the construction of the RMS Titanic. Sectarian divisions in Ulster became hardened into the political categories of unionist (supporters of the Union with Britain; mostly, but not exclusively, Protestant) and nationalist (advocates of repeal of the 1800 Act of Union, usually, though not exclusively, Roman Catholic). Northern Ireland’s current politics originate from these late 19th century disputes over Home Rule that would have devolved some powers of government to Ireland, and which Ulster Protestants usually opposed—fearing for their religious rights calling it “Rome Rule” in an autonomous Roman Catholic-dominated Ireland and also not trusting politicians from the agrarian south and west to support the more industrial economy of Ulster. This lack of trust, however, was largely unfounded as during the 19th and early 20th century important industries in the southernmost region of Cork included brewing, distilling, wool and like Belfast, shipbuilding. 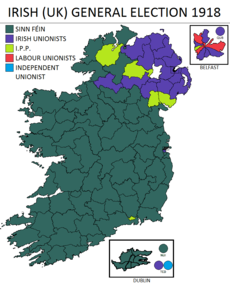 Thousands of unionists, led by the Dublin-born barrister Sir Edward Carson and James Craig, signed the “Ulster Covenant” of 1912 pledging to resist Home Rule. This movement also set up the Ulster Volunteer Force (UVF). In April 1914, the UVF assisted with the landing of 30,000 German rifles with 3,000,000 rounds at Larne by blockading authorities. The Curragh Incident showed it would be difficult to use the British army to enforce home rule from Dublin on Ulster’s unionist minority.

In response, Irish republicans created the Irish Volunteers, part of which became the forerunner of the Irish Republican Army (IRA) – to seek to ensure the passing of the Home Rule Bill. Upon the outbreak of World War I in 1914, 200,000 Irishmen, both Southern and Northern, of all religious sects volunteered to serve in the British Army. This had the effect of interrupting the armed stand-off in Ireland. As the war progressed, in Ireland, opposition to the War grew stronger, reaching its peak in 1918 when the British government proposed laws to extend conscription to all able bodied Irishmen during the Conscription Crisis.

In the aftermath of World War I, the political party Sinn Féin (“Ourselves”) won the majority of votes in the 1918 Irish general election, this political party pursued a policy of complete independent self-determination for the island of Ireland as outlined in the Sinn Féin campaign Manifesto of 1918, a great deal more than the devolved government/Home Rule advocated by the (I.P.P) Irish Parliamentary Party. Following the Sinn Féin victory in these elections the Irish Declaration of Independence was penned and Irish republicans launched a guerrilla campaign against British rule in what became the Irish War of Independence (January 1919 – July 1921). The fighting in Ulster during the Irish War of Independence generally took the form of street battles between Protestants and Roman Catholics in the city of Belfast. Estimates suggest that about 600 civilians died in this communal violence, the majority of them (58%) Roman Catholics. The IRA remained relatively quiescent in Ulster, with the exception of the south Armagh area, where Frank Aiken led it. A lot of IRA activity also took place at this time in County Donegal and the City of Derry, where one of the main Republican leaders was Peadar O’Donnell. Hugh O’Doherty, a Sinn Féin politician, was elected mayor of Derry at this time. In the First Dáil, which was elected in late 1918, Prof. Eoin Mac Néill served as the Sinn Féin T.D. for Londonderry City.

Partition of Ireland, first mooted in 1912, was introduced with the enactment of the Government of Ireland Act 1920, which gave a form of “Home rule” self-government to two areas, Southern Ireland, with its capital at Dublin, and “Northern Ireland“, consisting of six of Ulster’s central and eastern counties, both within a continuing United Kingdom of Great Britain and Ireland. Dissatisfaction with this led to the Irish War of Independence, which formally ceased on 11 July 1921. Low-level violence, however, continued in Ulster, causing Michael Collins in the south to order a boycott of Northern products in protest at attacks on the Nationalist community there. The Partition was effectively confirmed by the Anglo-Irish Treaty of 6 December 1921. One of the primary stipulations of the treaty was the transformation of Ireland into a self-governing British dominion called the Irish Free State (which later became the sovereign Republic of Ireland), but with the option of a continuation of the home rule institution of Northern Ireland, still within the United Kingdom, if the Northern Ireland Parliament (already in existence) chose to opt out of the Irish Free State. All parties knew that this was certain to be the choice of the Ulster Unionists who had a majority in the parliament, and immediately on the creation of the Free State they resolved to leave it.

Brought to you by: Moth Trap Reviews