Violence escalated after 16 January 2014 when the government accepted new Anti-Protest Laws. Violent anti-government demonstrators occupied buildings in the center of Kyiv, including the Justice Ministry building, and riots left 98 dead with approximately fifteen thousand injured and 100 considered missing from 18 to 20 February. On 21 February, President Yanukovych signed a compromise deal with opposition leaders that promised constitutional changes to restore certain powers to Parliament and called for early elections to be held by December. However, Members of Parliament voted on 22 February to remove the president and set an election for 25 May to select his replacement. Petro Poroshenko, running on a pro-European Union platform, won with over fifty percent of the vote, therefore not requiring a run-off election. Upon his election, Poroshenko announced that his immediate priorities would be to take action in the civil unrest in Eastern Ukraine and mend ties with the Russian Federation. Poroshenko was inaugurated as president on 7 June 2014, as previously announced by his spokeswoman Irina Friz in a low-key ceremony without a celebration on Kyiv‘s Maidan Nezalezhnosti (Independence Square, the centre of the Euromaidan protests) for the ceremony. In October 2014 Parliament elections, Petro Poroshenko Bloc “Solidarity” won 132 of the 423 contested seats.

Separately, in the Donetsk and Luhansk regions, armed men declaring themselves as local militia supported with pro-Russian protesters seized government buildings, police and special police stations in several cities and held unrecognized status referendums. The insurgency was led by Russian emissaries Igor Girkin and Alexander Borodai as well as militants from Russia, such as Arseny Pavlov.The ousting of Yanukovych prompted Vladimir Putin to begin preparations to annex Crimea on 23 February 2014. Using the Russian naval base at Sevastopol as cover, Putin directed Russian troops and intelligence agents to disarm Ukrainian forces and take control of Crimea. After the troops entered Crimea, a controversial referendum was held on 16 March 2014 and the official result was that 97 percent wished to join with Russia. On 18 March 2014, Russia and the self-proclaimed Republic of Crimea signed a treaty of accession of the Republic of Crimea and Sevastopol in the Russian Federation. The UN general assembly responded by passing resolution 68/262 that the referendum was invalid and supporting the territorial integrity of Ukraine.

Talks in Geneva between the EU, Russia, Ukraine, and the United States yielded a Joint Diplomatic Statement referred to as the 2014 Geneva Pact[200] in which the parties requested that all unlawful militias lay down their arms and vacate seized government buildings, and also establish a political dialogue that could lead to more autonomy for Ukraine’s regions. When Petro Poroshenko won the presidential election held on 25 May 2014, he vowed to continue the military operations by the Ukrainian government forces to end the armed insurgency. More than 9,000 people have been killed in the military campaign.

In August 2014, a bilateral commission of leading scholars from the United States and Russia issued the Boisto Agenda indicating a 24-step plan to resolve the crisis in Ukraine. The Boisto Agenda was organized into five imperative categories for addressing the crisis requiring stabilization identified as: (1) Elements of an Enduring, Verifiable Ceasefire; (2) Economic Relations; (3) Social and Cultural Issues; (4) Crimea; and, (5) International Status of Ukraine. In late 2014, Ukraine ratified the Ukraine–European Union Association Agreement, which Poroshenko described as Ukraine’s “first but most decisive step” towards EU membership. Poroshenko also set 2020 as the target for EU membership application. 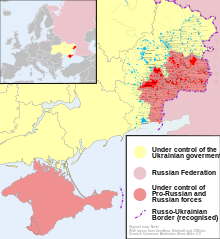 Crimea, which Russia annexed in 2014, is shown in pink. Pink in the Donbas area represents areas held by the DPR/LPR separatists in September 2014 (cities in red).
In February 2015, after a summit hosted in Belarus, Poroshenko negotiated a ceasefire with the separatist troops. This included conditions such as the withdrawal of heavy weaponry from the front line and decentralization of rebel regions by the end of 2015. It also included conditions such as Ukrainian control of the border with Russia in 2015 and the withdrawal of all foreign troops from Ukrainian territory. The ceasefire began at midnight on 15 February 2015. Participants in this ceasefire also agreed to attend regular meetings to ensure that the agreement is respected.

On 1 January 2016, Ukraine joined the Deep and Comprehensive Free Trade Area with European Union, which aims to modernize and develop Ukraine’s economy, governance and rule of law to EU standards and gradually increase integration with the EU Internal market. Then, on 11 May 2017 the European Union approved visa-free travel for Ukrainian citizens: this took effect from 11 June entitling Ukrainians to travel to the Schengen area for tourism, family visits and business reasons, with the only document required being a valid biometric passport.

Brought to you by: Cleaner Today Roof Cleaner