In 1977 a flag of almost the same colors and symbolism as the future national flag was designed by local artist Kalontas Malon and adopted by the Vanua’aku Pati. When the party led the New Hebrides to independence as Vanuatu in 1980, the colors of the party flag (red, green, black and yellow) were chosen to be the basis for the national flag on Independence Day, 30 July 1980. A parliamentary committee chose the final design based on submissions from local artists.

The flag of the United States of America, often referred to as the American flag or the U.S. flag, is the national flag of the United States. It consists of thirteen equal horizontal stripes of red (top and bottom) alternating with white, with a blue rectangle in the canton (referred to specifically as the “union”) bearing fifty small, white, five-pointed stars arranged in nine offset horizontal rows, where rows of six stars (top and bottom) alternate with rows of five stars. The 50 stars on the flag represent the 50 states of the United States of America, and the 13 stripes represent the thirteen British colonies that declared independence from the Kingdom of Great Britain, and became the first states in the U.S. Nicknames for the flag include the Stars and Stripes, Old Glory, and the Star-Spangled Banner.

Like many former and current British dependencies, the Tuvaluan flag is a blue ensign based on the Union Flag, which is shown in the canton of the flag; but has a sky blue field rather than the conventional blue. The previous flag (with the Gilberts) was also based on the Union Flag but with the coat of arms created by Sir Arthur Grimble in 1932, the resident commissioner of the British colony.

The stars represent the nine islands which comprise Tuvalu; the arrangement is geographically correct, with the east towards the top (i.e. north to the left).

The flag of Tonga consists of a red field with a white canton charged with a red couped cross. Adopted in 1875 after being officially enshrined into the nation’s constitution, it has been the flag of the Kingdom of Tonga since that year. The constitution stipulates that the national flag can never be changed. 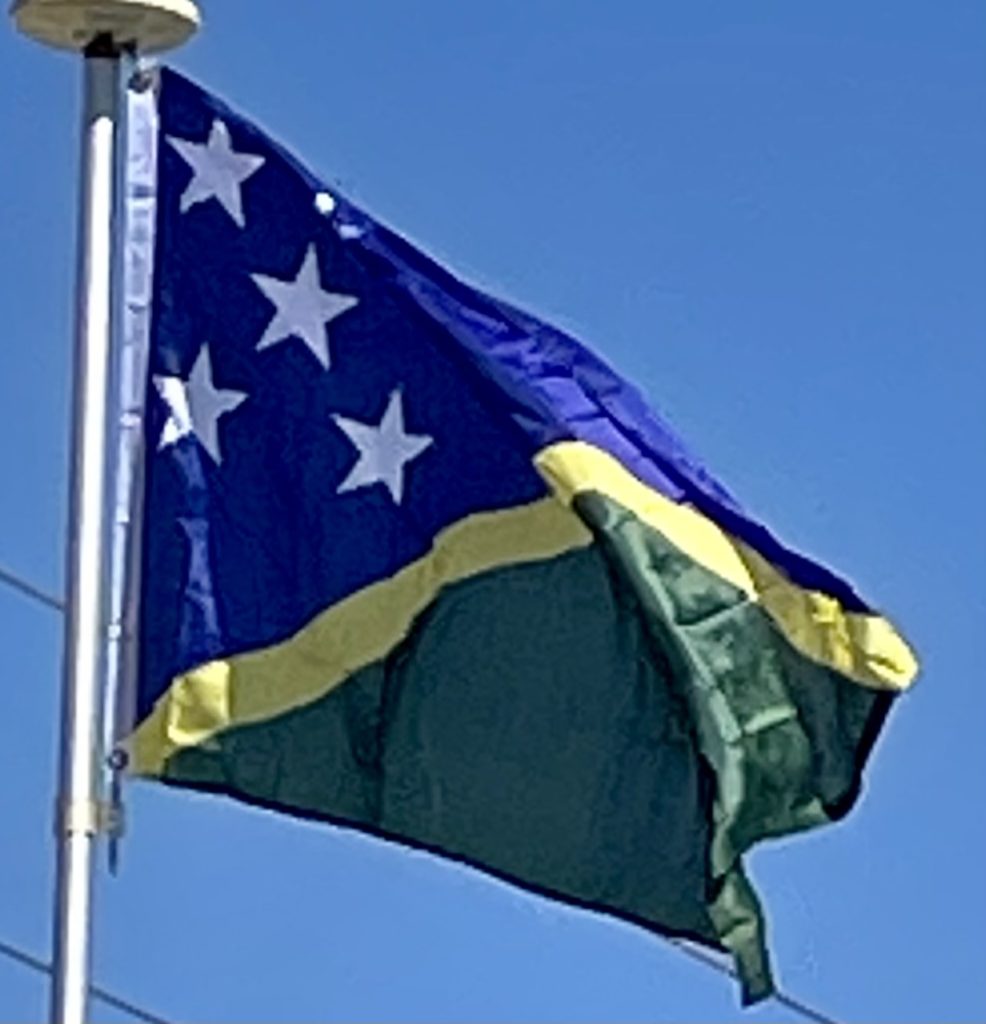 he flag of the Solomon Islands consists of a thin yellow diagonal stripe divided diagonally from the lower hoist-side corner, with a blue upper triangle and green lower triangle, and the canton charged with five white stars. Adopted in 1977 to replace the British Blue Ensign defaced with the arms of the protectorate, it has been the flag of the Solomon Islands since 18 November of that year, eight months before the country gained independence. Although the number of provinces has since increased, the number of stars on the flag that originally represented them remained unchanged.

The flag of Samoa was first adopted from February 24, 1949. It consists of a red field with a blue rectangle in the canton. The blue rectangle bears the Southern Cross: four large white stars and one smaller star.

The Philippine national flag has a rectangular design that consists of a white equilateral triangle, symbolizing liberty, equality and fraternity; a horizontal blue stripe for peace, truth, and justice; and a horizontal red stripe for patriotism and valor. In the center of the white triangle is an eight-rayed golden sun symbolizing unity, freedom, people’s democracy, and sovereignty. Each ray represents a province with significant involvement in the 1896 Philippine Revolution against Spain; these provinces are Manila, Bulacan, Cavite, Pampanga, Morong (modern-day province of Rizal), Laguna, Batangas, and Nueva Ecija.

The flag of Peru was adopted by the government of Peru in 1824, and modified in 1950. According to the article 49 of the Constitution of Peru, it is a vertical triband with red outer bands and a single white middle band. Depending on its use, it may be defaced with different emblems, and has different names. Flag day in Peru is celebrated on 7 June, the anniversary of the Battle of Arica.

The flag of Papua New Guinea was adopted on 1 July 1971. In the hoist, it depicts the Southern Cross; in the fly, a raggiana bird-of-paradise is silhouetted. The design was chosen through a nationwide design competition in early 1971. The winning designer was Susan Karike Huhume, who was 15 at the time.

Red and black have long been traditional colours of many Papua New Guinean tribes. Black-white-red was the colour of the German Empire flag, which had colonised New Guinea prior to 1918. The bird-of-paradise is also found on the national coat-of-arms.

Prior to independence, the Australian administration proposed a vertical tricolour flag with blue, yellow and green bands, along with the bird of paradise and southern cross, designed by Hal Holman. It had a mainly negative reception, due to its appearance as that of a “mechanically contrived outcome”, thus the alternative proposal attributed to Susan Karike was chosen instead. The blue was said to represent the sea and islands of New Guinea, the Southern Cross was a guide for the travelling peoples, the gold represented the coastlines, mineral wealth, and unity, and the green represented the forested highlands and mainland, with the Bird of Paradise representing the unification under one nation.

The Southern Cross shows that it is a country in the Southern Hemisphere and can be seen in Papua New Guinea.